I haven’t been allowed to have any take-aways for months! I know, how did I survive this long? Also, I haven’t been able to go to Chinese restaurants. Therefore my Chinese levels are dangerously low right now.

I haven’t been able to go to parties or even larger gatherings for such a long time that it’s a wonder that anyone remembers who I am. My doctor advised against going to church too, but I did go, on 2 weeks out of 3 (missing the week where my white blood cell count was at its lowest.) Even then we hid at the back of the building, barricaded ourselves off with the pushchair and didn’t go into the coffee area to chat. So I haven’t spoken to many people at all and certainly haven’t met any new people in what feels like ages. I am not used to being unsociable. Thankfully. I still have met up with a few people, but it’s not the same when you have to be OCD about germs all the time. It’s boring.

I used to be a fully paid-up member of the Brogan’s fan club. But because it is situated in the germ-full wild west that is town centre, I have been banned. They are probably wondering where I am right now and sobbing into their decaff caramel lattes .

I don’t usually go to the cinema that often, but not being able to go has made it all the more attractive. I usually take Connor to see at least one movie in the school holidays, and I’ve not been able to for the last two. I have told him that when I can go again, we will go and watch a film and he can have all the popcorn and hotdogs that he wants. It will be awesome.

When I had the PICC line in, swimming was a complete no-no. No it’s out I can’t wait to go swimming. I realise that I won’t be able to wear a headscarf or hat in the pool, so will probably have to endure much staring, which is tiresome. But it will be worth it. Splash splash. 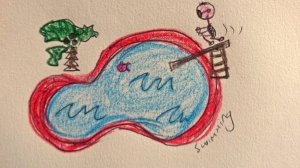 Soft cheeses have been off the menu too. How is a vegetarian supposed to cope without a brie and cranberry panini for half a year? Ok, I did it when I was pregnant, but that’s a bit different.

Then I was expecting the arrival of a small screaming bundle of joy. Now the only thing that is popping out is some fatty tissue laced with cancer: not quite the same.

I work in a college library, and love reading, writing and drawing. I am a breast cancer survivor. View all posts by Alex

One thought on “7 things”